exploring open source
sign up for updates via:
email · twitter · rss
archives · about
I'm Neal and this is my blog.
Every week I write about an under-the-radar open source project and post a demo app, gif, or video. Contact me.

Web scraping is in the middle of an arms race. Last week, I read an article by Francis Kim about how scraping—every hacker’s favorite tool for getting around APIs, data-mining, and liberating data—has become harder, because sites are getting better at identifying scrapers and shutting them out.

Francis lays out a bunch of solutions (including an alarming anti-CAPTCHA service) for defeating anti-scraping measures. However I was surprised that neither he nor any commenters mentioned user agent strings.

PhantomJS, Selenium, and other automation tools usually allow you to spoof a particular UA, so why aren’t more people using this to make their scrapers appear to be real, random browsers?

A few days later, I came across Randall Degges’ useragent-api which returns a random UA string every time you make a request. It’s not a panacea, but is an elegant solution for masking your scripts intentions & provenance.

Unlike the Cold War, I think the battle over scraping is going to get hot. Keep your eyes peeled.

It’s nice that you can edit Slack messages whenever you make a typo, but that means you have to mouse over, click edit, make your edit, click enter, etc. It’s a whole thing.

But what if you could just do this instead?

Pretty neat, hunh? Just type in your correction, like you would have on AIM and slack-typobot will update your original message. Bing. Bang. Boom!

People often ask me why, if I love coding so much, I haven’t pursued a career in software development. I shrug and tell them I’m a hacker. Being a pro developer would take all the fun out of it because I’d have to follow ‘best practices’ (screw you PEP8), ‘architect’ solutions, do code reviews, use JIRA, and numerous other things that would kill my vibe.

Think about movie critics. In theory, they have the best job ever: watching movies all day. But, they’re incapable of enjoying mindless action flicks like The Fast & Furious because they have to focus on things like plot, character development, and the Bechdel Test.

This is all my way of saying, I’ve never used virtualenv when writing Python apps. I just pip install modules globally and get to hacking. And that’s great because I never have to think about “did I install x?”—at least until it’s time to deploy to Heroku.

Fortunately, I found another hacker out there who appreciates my philosophy. Vadim Kravcenko’s pipreqs module generates requirements.txt files based on the libraries you’re using, not just what you’ve installed in your environment (🖕 pip freeze).

For example, my latest project has a lots imports spread across 3 or 4 source files:

But with pipreqs, I can run pipreqs ~/path/to/app and I get a perfectly formatted requirements file:

This was the first half of my Friday night:

Neat right? Well, the second half didn’t go so well:

So yeah, lots of feels. I built an API to serve data from my database on Heroku to a static website hosted on S3 (via XMLHttpRequest). But, because of CORS, the requests were invalid 😡

ICYMI: The Same Origin Policy prevents Foo.com from accessing resources on Bar.com unless Foo is authorized via Cross Origin Resource Sharing. (Scripts, stylesheets, HTML, images, and a few other file types are obviously excluded from this rule.) This is also the bedrock of web security.

Fortunately, after a solid night’s (morning’s?) rest, I discovered Cory Dolphin’s Flask-CORS library. With 1 line of code, you can enable CORS for particular routes, resources, or your whole Flask app. No server configs. No weird DevOps voodoo.

Seriously, here’s my api route before:

without CORS, I can’t hit this API clientside

And after, with Flask-CORS:

There are lots of ways for an application to get your current location (latitude / longitude) programmatically, but wifi-triangulate is a little shady.

Most web apps ask for your permission before accessing your location (there’s a whole browser based API for this). But with wifi-triangulate, there’s no opt-in and it’s quite accurate. Pretty sure you could use this to locate a user, silently, without consent. 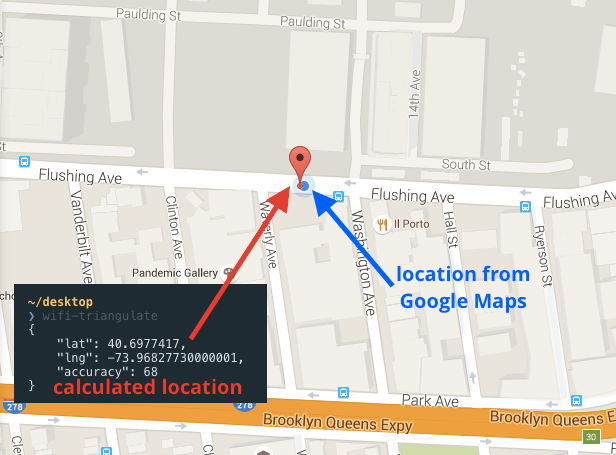 Yes, there are other / easier ways to get a user’s location. And no, this library isn’t inherently “evil.” But please be careful and follow the golden rule of software development: don’t be a dick (or a sucker).